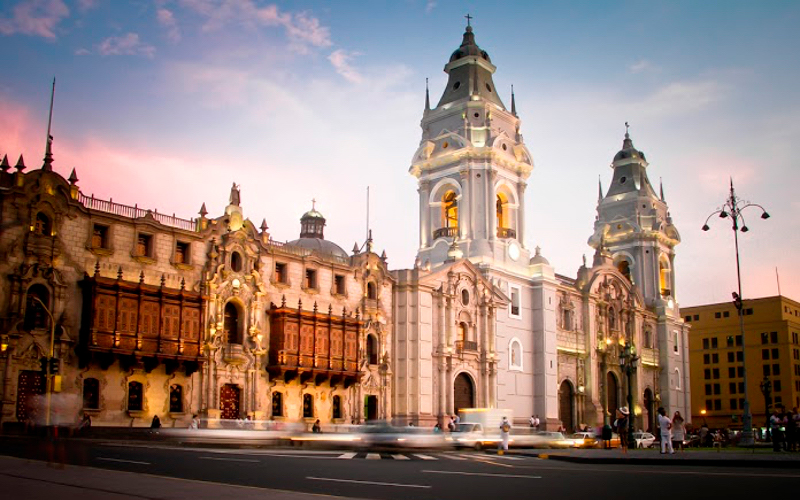 Lima, the city of kings, is the capital of Peru and is located on the arid Pacific coast of the country. Although its colonial center is preserved, it is an overflowing metropolis and one of the largest cities in South America.

On January 18, 1535, the Spanish foundation was made with the name of the City of Kings in the agricultural region known by the Indians as Limaq, name that acquired over time. It was the capital of the Viceroyalty of Peru and the largest and most important city of South America during Spanish imperial America. After Independence it became the capital of the Republic.

Lima is the only South American capital with access to the sea. Its beaches such as Ancon, Punta Hermosa, San Bartolo, Cerro Azul, among others, are perfect for surfers and on its piers, the gentle breeze refreshes bike rides and walks. You can also fly in paragliding over the Pacific Ocean.

However, its spas are not the only tourist and attractive places. Lima is a city full of wonders thanks to its nature, history and culture. All this is reflected in the places that we will mention next:

Plaza Mayor de Lima, is the founding site of the city of Lima. It is in the historic center of Lima, around it is the Government Palace of Peru, the Cathedral of Lima, the Church of the Sagrario, the Archbishop’s Palace of Lima, the Municipal Palace of Lima and the Union Club.

Parque de la Reserva, is a park located near Santa Beatriz in the Cercado de Lima. It has an irregular shape, and is located between three of the main roads that leave the city center to the south of it: The Paseo de la República, Petit Thouars Avenue and Arequipa Avenue.

Museo Larco, was founded in 1926. Exhibits galleries that show the 3000 years of development of the history of pre-Columbian Peru. It is located inside a colonial house that dates from the eighteenth century.

Larcomar, is an exclusive shopping center located on the final stretch of Larco Avenue in the district of Miraflores. This shopping center was inaugurated on November 27, 1998.

Park of Love, The Park of Love is located on the Malecón Cisneros in Miraflores, it was inaugurated on February 14, 1993, it presents in the central part a beautiful sculpture dedicated to love, “El Beso”, whose author is the Peruvian artist Víctor Dolphin.

Government Palace of Peru, is the main headquarter of the Peruvian executive power and the official residence of the president of Peru. It is in the Plaza Mayor of the historic center of Lima, on the banks of the Rímac River.

Cathedral of Lima, is the Major Church of Peru and is in the historic center of Lima.

Huaca Pucllana, is an archaeological site pertaining to the Lima culture, of the period of the regional developments, located in the district of Miraflores.

Historical Center of Lima, is the area of ​​the city of Lima that includes its original location and its oldest buildings. The complex, located between the districts of Lima and Rimac, was declared a World Heritage Site in 1988 and is one of the most important tourist destinations in Peru. 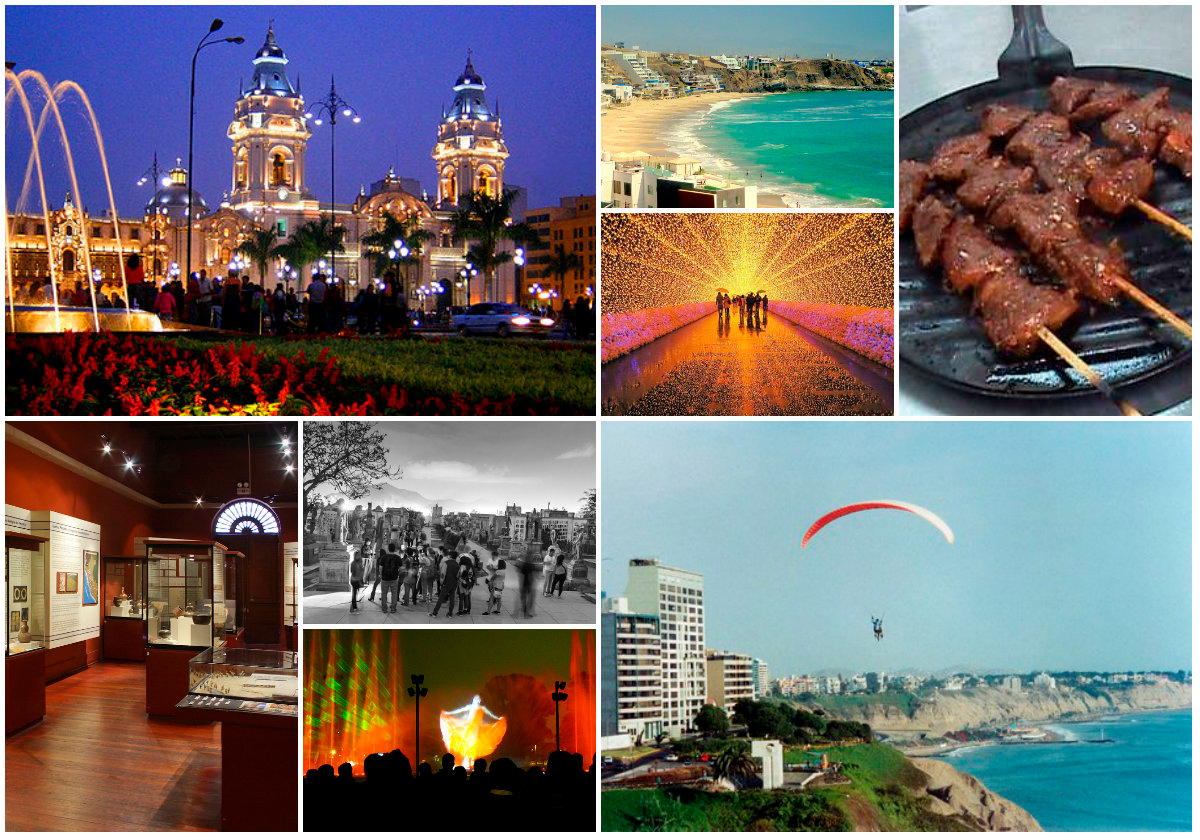 Parque de las Leyendas, it is in the District of San Miguel. Currently, apart from the zoo, there is a botanical garden, a museum site and you can visit some of the huacas that are around the park.

Fortress of Real Felipe, is a military building built in the eighteenth century in the bay of Callao, during the governments of the viceroys José Antonio Manso de Velasco and Manuel de Amat y Juniet, to defend the port against the attacks of pirates and corsairs.

Parque de la Exposición, is a park located in the center of Lima. Within its extension is the Museum of Art of Lima, the Metropolitan Museum of Lima, the Italian Art Museum, Military Historical Studies Center and the National School of Dramatic Arts.

Museo de la Nación, is an archaeological museum and one of the largest in Peru. It is a space of great conservation of Peruvian heritage.

Alameda Chabuca Granda, is a wide viewpoint of the city of Lima adjoining the Government Palace and on the banks of the Rímac River. From there you can see the old district of Rímac, the San Cristóbal hill, the train station of Desamparados, the Rayos del Sol bridge and a vast horizon of colonial mansions.

Planetarium Morro Solar, is in the District of Chorrillos and is one of the most important planetariums in Lima and Peru.

Cerro San Cristóbal, is a hill located between the district of Rímac and San Juan de Lurigancho. It forms part of the isolated hills of the mountainous system of the Andes mountain range.

Archaeological Sanctuary of Pachacamac, is an archaeological site located on the right bank of the Lurín River, very close to the Pacific Ocean in the Pachacamac district. It contains the remains of various buildings, dating from the Early Intermediate (3rd century) to the Late Horizon (15th century), with the best-preserved Inca buildings (1450-1532).

There are more tourist places that will surprise you in the City of Kings and many activities that you can enjoy visiting these attractions of the capital of Peru.

Lima is also famous for its lively cuisine, which ranges from ceviche to refined preparations of world cuisine. In this city the abundance of natural products, the fusion of techniques and cultures, forged in centuries a gastronomy with mestizo identity. Because of the excellent quality and passion of Peruvian chefs, Lima has been named Gastronomic Capital of Latin America. 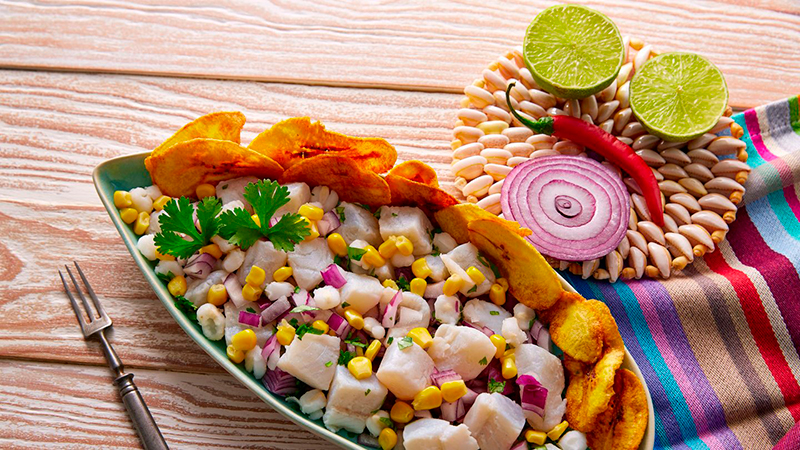 Among the typical dishes of the region, the following stand out:

Some of the typical desserts of Lima are the mazamorra morada, the sigh of Lima, the nougat of Doña Pepa and the picarones. The traditional drinks are chicha morada and Pisco Sour.

The best season to visit the city is in the hot summer time where the holidays worship the sun on the beaches of the city among other very enjoyable and fun outdoor activities that can be enjoyed with friends and family.

A single trip is not enough to discover all the wonders that Lima offers. Nature, history, culture, adventure, entertainment and one of the best cuisines in the world come together to create an unforgettable experience. You can trace your own route, choose some activities or live them all.

More Than The Classics: 5 Best Things to Do in Peru off the Beaten Path
226900 Views