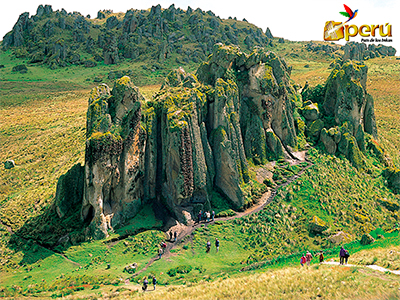 We will visit to the Historic Centre of Cajamarca, one of the most remarkable monumental Complex of America, possessor of a rich artistic and symbol of the identity of our people, inherited from our ancestors. Over the time, the city of Cajamarca has witnessed important events that register in the history of our country and the continent, as the Enconter of Two Worlds, in recognition of this fact, has been declared by the Organization of American States (OEA) as “Historical and Cultural Heritage of the Americas” (1986). We will see the Main Square, its beautiful temples such as the Cathedral, Saint Francisco, the Monumental Complex of Belen, with imposing facade of the Baroque style. Visit to The Ransom Room, which served to store the treasures of gold and silver that were offered in exchange for the freedom of the Inca Atahualpa (considered the highest ransom in history). Then we will see the Colonial Hospitals of men and women, and the Ethnographic Museum and finally the Santa Apolonia Hill, site of the Inca Chair.

We will  visit to the former farm La Collpa, located 11 km. from the city of Cajamarca, where the cows are called by their name for daily milking. This former farm presents a landscape of green areas and some forested hillsides. A few meters from the house, a chapel, workshops and environments for milking, we can also see an artificial lagoon

decorated with small bridges and surrounded by gardens. Continue after visiting the Plaza de Armas de Llacanora (Main square), a picturesque village, the prototype of the mountains of Cajamarca, visit its beautiful waterfalls, and then we will go to the Baños del Inca District, known in Inca times as Puquio Inti, which means “waterhole of the sun”, also used to be called Nina Yacu, “water of fire”, and Pultumarca, “warm place”. It is said that at the arrival of the Spaniards to Cajamarca, the Inca was resting here. The Inca Baths have temperatures above 70 ºC (158 ºF). The minerals that compose them have therapeutic properties for treatment of disease to the bones, skin and nervous system. Return to the city.

We will visit to the Necropolis of Otuzco, located 8 km from the city of Cajamarca, in Baños del Inca District. This archaeological complex belonged to a pre Inca culturen before to Caxamarca culture and likely of Wari influence. There are hundreds of galleries and individual niches like windows, which were carved into the volcanic rock, wich reach up to 8 and 10 m. deep. Its entrances are rectangular and square cut, 50 to 60 cm in height. Originally it would to be tombstones with symbolic figures in relief, judging from some fragments found nearby. Continue the tour visiting the suspension bridge, the garden of hydrangeas, the Tres Molinos Farm and Los Alpes Farm, ranch where we can taste delicious dairy products.

The tour includes a visit to Cumbemayo, with an area of 25,000 m2, located at the foot of the Cumbe hill to 3,500 meters. It is believed that there are buildings that were erected around 1200 AD by Caxamarca culture, but also has a marked influence of Chavín culture. The place comprises three groups of buildings: The Sanctuary (a cave shaped at the base of a cliff with a human head), the Caves (anthropomorphic petroglyphs, whose drawings so far have not been deciphered) and the Aqueduct (a true wonder of Hydraulic Engineering pre-Hispanic era made in volcanic lava). Many of its parts are carved into the rock, with between 35 and 50 cm wide and 30 to 65 cm deep. Frets and angles used to slow the velocity of water and also prevent erosion. The “Frailones” cover a considerable area of cliffs, with many fanciful forms, that resemble the shapes of monks in silent procession. On the way we look at the Mirador, the Archaeological Center of Layzón, Forest Park, etc.

Along the way, we will visit the Huambocancha stonecutters. Then we will visit the Agricultural Cooperative Atahualpa Jerusalem, known as Porcón Farm. The Cooperative owns 12.800 hectares, which has developed an impressive reforestation project, mainly with pine trees of various species, including growing edible mushrooms. Currently, the Cooperative operates their forests wisely over 12 million trees. It is perhaps the only large agricultural cooperative that took advantage of Agrarian Reform. It is located 30 km north of Cajamarca city. Our tour will be done by the workshops of traditional weaving, the carpenter’s workshop, the shop where you can buy delicious dairy products made on site, such as: cheese, butter, yogurt or blancmange. Visit to the mini zoo, the fish farm and the park of deers and vicuñas. Return to the city.

The tour includes visits to Kuntur Wasi ceremonial center, which is situated on the hill Cup in the small province of San Pablo (2.300 m). It belongs to the formative period, ll00 years BC. This is a hill whose top was built a temple in the Formative period and where, in addition to stepped platforms and funerary structures, there is evidence of stone sculptures of Cupisnique style, but so well developed as those of Chavin de Huantar.

The name “Kuntur Wasi”, which origin is Quechua, means “House of the Condor”. Its ceremonial structure was built, renovated and subsequently amended by various societies, in the period from 1200 to 250 BC. Under the floor of the Temple, built around 800 BC, have been discovered several graves with many offerings of gold, ceramic, shells, stone and bone ornaments.  After visiting the monoliths, we will continue visiting the Site Museum which displays the findings of the Japanese Mission, like necklaces, crowns, earrings, breastplates, trophy heads and small characters in the iconography Chavinoid, Cupisnique and of a particular local mode associated with Kuntur Wasi and Jequetepeque region, all made of gold. Then visit to the Province of San Pablo and return to Cajamarca.