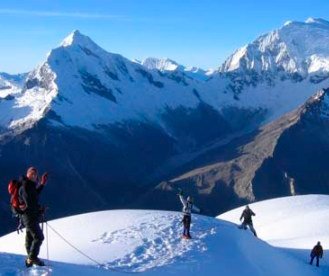 Visit to the archaeological sites of Wilcahuain and Antaoco, remains from the period Wari-Tiwanacu. Here we observe funerary chambers built in various levels surrounded by the magnificent Andean panorama of the Callejón de Huaylas Valley. Also visit to the Regional Archaeological Museum, where displays of pottery, mummies, stone sculptures, trepanned skulls, stone sculptures of Recuay warriors and also retains ceramics of the major cultures of ancient Peru, highlighting the culture Recuay which were found as funerary offerings and are made ​​up of beautiful vases worked in kaolin and decorated in red and black. These cultural artifacts represent various periods and levels of regional development such as the Recuay, Jancu, Huaraz, and Wari cultures.

In the morning we will drive along the magnificent Callejón de Huaylas Valley watered by the Santa River and located between the Cordillera Blanca and the Cordillera Negra mountain ranges.  On the way, we will visit picturesque towns such as Carhuaz -which offers colorful Indian markets-, Mancos and Yungay. Turning east, the mountain scenery becomes increasingly spectacular as we ascend the slopes of the Cordillera Blanca. Impressive peaks such as Huandoy (6,356 masl) and Huascarán (6.768 masl) form the granite walls of this U-shaped canyon with its two turquoise Llanganuco lakes. We are in the heart of Huascarán Biosphere Reserve. This is a giant natural history laboratory where you learn about high tropical Andes species and ecosystems. In the Chinacocha lake (3,850 masl) we appreciate different flora species such as colorful bromeliads, orchids and cactus, among other plant species that grace the granite boulders and cliffs.  After enjoying the wonderful scenery and take the photographs, we descend to Caraz. (2,256 masl). Return to Huaraz and transfer to our hotel.

We will drive along the southern Callejón de Huaylas Valley across the picturesque towns of Recuay, Ticapampa and Catac. We arrive to Querocoha Lake (3,980 masl), surrounding by native quenual trees. We traverse the Cordillera Blanca to visit Chavín de Huántar (1300 to 4000 BC), South America’s oldest and most advanced culture, and one of the six independent centers of civilization in world prehistory, predating the Incas by about 2000 years.  Chavín’s monumental granite pyramids and ceremonial plazas are linked by colossal carved stone staircases and platforms.  Subterranean chamber complexes, known as galleries, are built in a most sophisticated architectural engineering style.  In the Old Temple, we will visit the Lanzón Gallery with its supreme deity of Chavín, a large stone idol of 4.5 m carved with human, Jaguar, Anaconda, and Harpy Eagle iconography. The New Temple, (The Castle) is built in 3 platforms, constructed between 500 and 200 B.C. Sophisticated carved keystone heads, horizontal and vertical ventilation wells, friezes, cylindrical columns, and astronomic representations are a puzzle for Andean archaeo-astronomers. The walls of Chavín were decorated with carved heads, set deep into stone. Some of the carved heads have mucus pouring from the nose, something that happens when hallucinogenic snuff is snorted. Rare Ecuadorian shells are often found in tombs of the Chavín era, as the precious lapis lazuli from Atacama desert in Chile. Chavín de Huantar has been designated a UNESCO World Heritage Site. Then we will visit the museum, where we will appreciate Chavin ceramics and lithic sculptures like the famous “Tello Obelisk”. Return to Huaraz and transfer to our hotel.