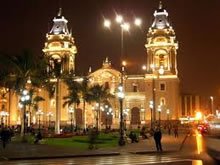 Assistance at your arrival to Lima International Airport and transfer to your Hotel. There you will receive a briefing on your tour; receive vouchers covering all the services included in your tour and additional information on the organization of your Peru trip.

In the Morning, guided sightseeing tour to the most attractive and important sites in Lima, the “City of Kings”. The tour includes Lima’s Historical Centre, passing by Plaza San Martin, Plaza Mayor, the Government Palace, the City Hall, the Cathedral and its Religious Art Museum, the Church of Santo Domingo and Lima’s Colonial Balconies. We will visit the Convent and Church of San Francisco, the greatest monumental complex of Colonial Art in America and Cultural Heritage of Humanity. The tour includes a visit to the Basilica of 21 altars, Convent of Cloisters, Capitulary and Clementine Rooms, Chorus and Library of the monks, a Museum showing 11 paintings of the Rubens School, the Sacristy with paintings of Surbaran and Ribera, it’s great patio decorated with Seville tiles of the XVI th. Century, Moorish arches and underground Catacombs. And finally we will go to the residential Districts of San Isidro and Miraflores, passing by the Huaca Pucllana, a Ceremonial and Administrative Centre of the Lima Culture built in the II Century A.C. that the Incas considered as “Ñaupallaqta” or Sacred Town. We will also visit El Olivar Park with olive trees brought from Spain in the XVth Century, the Central Park of Miraflores and Larcomar, a symbol of modern Lima and a tourist and entertainment centre as well as a privileged site to enjoy an amazing view of the Pacific Ocean.

Breakfast and transfer to the airport to take flight to Cusco. Meet upon arrival and transfer to your selected Hotel. Rest and adapt to altitude. Meals Included: Breakfast.

Early morning excursion to the Urubamba Valley, the Sacred Valley of the Incas. Visit to the picturesque Indian Pisac Market held on Tuesdays, Thursdays and Sundays, the shopping paradise of the Andes where barter is still practiced. Enjoy the unique atmosphere during a typical lunch. In the afternoon, passing through the Towns of Calca and Urubamba, we visit the Inca Fortress and Citadel of Ollantaytambo, built to guard the entrance to this part of the Valley, and protect it from possible invasion from the tribes in the Lower jungle. You can walk through the quaint streets of the nearby Town, and get a good idea of what this Strategic Military, Religious, and Agricultural Centre was like during the era of the Inca Empire. On our way back to Cusco we stop of at the picturesque Andean village of Chinchero to visit the ruins of the Royal Hacienda of Tupac Inca Yupanqui. We will admire a well-preserved Inca Wall in the Main Square, and visit the beautiful Colonial temple built on Inca foundations, with interesting frescoes in the portico. Late afternoon return to your selected Hotel for overnight. Evening free. We suggest strolling around the Main Square and enjoy the night atmosphere trying a delicious Pisco Sour in some of the many pubs around the Square. Note: The visit to the Village of Chinchero depends on the time available.

The day starts with an early morning rise to transfer to Cusco train station for a 3 ½ hour train journey to the famous Inca Citadel of  Machu Picchu , also known as “The Lost City of the Incas”. Arrive at Aguas Calientes station followed by a 30-minute bus drive, climbing 6km of winding road, to the incredible  Machu Picchu . Upon arrival, we’ll participate in a guided tour of the Citadel, visiting the Main Plaza, the Circular Tower, the Sacred Sun Dial, the Royal Quarters, the Temple of the Three Windows and various burial grounds. After the tour you will have time to stroll around the archaeological site at your leisure. Lunch at a local restaurant in Aguas Calientes Town. Overnight at Hotel in Aguas Calientes.

Leisurely breakfast. Excellent opportunity to wake up early and enjoy with a beautiful sunrise as well as stroll by the Town of Aguas Calientes and visit its Hot Springs Thermal waters. Then, you will have time to perform some of the following activities: (not included in the overall tour price). Visit the Citadel of Machu Picchu for the second time. For the most adventurous people, we suggest to go up the Huayna Picchu (if it is not raining) from where you can appreciate the immensity of  Machu Picchu , even more amazing being high and distant. Arriving at the top takes about two hours and a half and it must be before 13:00 hours. It is necessary to register in a office at the beginning of the trail. An exciting adventure for the travellers who want to see, from the top, the nature and the carved stone emerging from the ground as a geological miracle.

Afternoon Cusco City TourOpen morning and In the afternoon, we will visit the City of Cusco on a guided sightseeing tour visiting the Main Square, the Cathedral and the Temple of the Sun or Korikancha. Then, we drive out of the City to visit the Inca sites of Kenko, Tambomachay, Puca Pucara and the impressive Fortress of Sacsayhuaman, strategically built on a hill overlooking Cusco, famous for its enormous carved stones, some of them standing over 9 m / 30 ft high and weighing over 350 tons.

Morning flight to Lima and connect flight to return to U.S.

PROGRAM DOES NOT INCLUDE