Assistance provided in Lima. At your hotel you will receive a briefing on your tour; receive vouchers covering all the services included in your tour and additional information on the organization of your Peru trip.

Morning transfer to Lima airport to take your flight to Cusco. Reception and transfer to your hotel.

In the afternoon, we will visit the City of Cusco on a 4-hour guided sightseeing tour visiting the Main Square, the Cathedral and the Temple of the Sun or Korikancha. Then, we drive out of the City to visit the Inca sites of Kenko, Tambomachay, Puca Pucara and the impressive Fortress of Sacsayhuaman, strategically built on a hill overlooking Cusco, famous for its enormous carved stones, some of them standing over 9 m / 30 ft high and  weighing over 350 tons.

Morning excursion to the Urubamba Valley, the Sacred Valley of the Incas. Visit to the picturesque Indian Pisac Market held on Tuesdays, Thursdays and Sundays, the shopping paradise of the Andes where barter is still practiced. Enjoy the unique atmosphere during a typical lunch. In the afternoon, passing through the Towns of Calca and Urubamba, we visit the Inca Fortress and Citadel of Ollantaytambo, built to guard the entrance to this part of the Valley, and protect it from possible invasion from the tribes in the Lower jungle. You can walk through the quaint streets of the nearby Town, and get a good idea of what this Strategic Military, Religious, and Agricultural Centre was like during the era of the Inca Empire. Return to Cusco.

The day starts with an early morning rise to transfer to train station for a journey to the famous Inca Citadel of Machu Picchu, also known as “The Lost City of the Incas”. Arrive at Aguas Calientes station followed by a 30-minute bus drive, climbing 6km of winding road, to the incredible Machu Picchu. Upon arrival, we’ll participate in a guided tour of the Citadel, visiting the Main Plaza, the Circular Tower, the Sacred Sun Dial, the Royal Quarters, the Temple of the Three Windows and various burial grounds. After the tour you will have time to stroll around the archaeological site at your leisure. Return to Cusco. 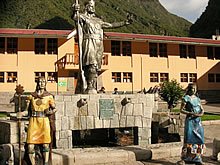 Breakfast. Early departure by bus to the City of Puno, (3,860 m.a.s.l.). During the trip, we pass by the lovely Wacarpay Lake, offering spectacular views of the mountains reflected in its calm waters. We proceed to the beautiful Town of Andahuaylillas, and visit the Church of San Pedro de Andahuaylillas, better known as the Sistine Chapel of the Americas, due to its decorated polychrome ceiling. On the way, we stop in Raqchi, where we can see a spectacular Inca Sanctuary built by the Inca Pachacutec, and dedicated to the great Inca God of Wiracocha. It has a great central wall with a stone base of fine Inca architecture.

Other walls are made of giant adobe bricks. The structure also has two circular lateral columns. Around the Temple are several buildings once used for housing and storage. About 70 km further on, we pass through La Raya Ranch where we can see herds vicuñas and llamas. Then we travel along the High Plateau of Collao, stopping at the Town of Ayaviri, an important livestock and textile centre, to visit the impressive Temple of Kalasaya, ruins from the ancient Pucara Culture. Buffet lunch in a countryside restaurant, where we can enjoy the delightful culinary art of the region. Afternoon arrival in Puno and transfer to your selected Hotel. Evening free. Overnight at selected Hotel in Puno.

Breakfast. Early in the morning, we will have an unforgettable motorboat excursion on the waters of Lake Titicaca to the unique “Floating Islands” of the Uros. These ancient inhabitants of the Lake, known as the Water Tribe, have built their own “Islands” by periodically adding new layers of a type of reed called “totora” (Scirpus totora), vegetable fibre of the Papyrus family. Their homes and boats are also made from this material. We will continue our trip to the island of Taquile. This Island is known for having the best weavers of ancient Peru. This place has preserved many rituals and the lifestyle of the ancient Incas. We will walk for about 30 minutes to the center of the island and will stay there for 3 hours and have lunch. Then we will descend 500 stairs. We will leave to Puno at 04:00pmIn the afternoon, return to Puno. Evening free. Overnight at selected Hotel in Puno.

Day 7: Transfer to airport or terminal 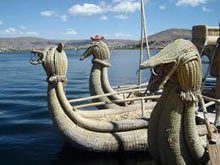 Take flight to Lima to connect with return flight home.

Guided sightseeing tour to the most attractive and important sites in Lima, the “City of Kings”. The tour includes Lima’s Historical Centre, passing by Plaza San Martin, Plaza Mayor, the Government Palace, the City Hall, the Cathedral and its Religious Art Museum, the Church of Santo Domingo and Lima’s Colonial Balconies. We will visit the Convent and Church of San Francisco, the greatest monumental complex of Colonial Art in America and Cultural Heritage of Humanity. The tour includes a visit to the Basilica of 21 altars, Convent of Cloisters, Capitulary and Clementine Rooms, Chorus and Library of the monks, a Museum showing 11 paintings of the Rubens School, the Sacristy with paintings of Surbaran and Ribera. Its great patio decorated with Seville tiles of the XVI Century, Moorish arches and underground Catacombs.

And finally we will go to the residential districts of San Isidro and Miraflores, passing by the Huaca Pucllana, a deremonial and administrative centre of the Lima Culture built in the II century A.C. that the Incas considered as “Ñaupallaqta” or Sacred Town. We will also visit El Olivar Park with olive trees brought from Spain in the XV century, the Central Park of Miraflores and Larcomar, a symbol of modern Lima and a tourist and entertainment centre as well as a privileged site to enjoy an amazing view of the Pacific Ocean.

PRICE PER PERSON BASED ON DOUBLE OCCUPANCY

Price subject to change based on in country airfare changes and availability. Only 50% deposit require. Price quote and spaces good for a minimum of 4 passengers. PLEASE ADD ONLY US$200 FOR CASA ANDINA PRIVATE COLLECTION HOTELS