Peru is one of the most biodiverse locations in the world which means that it’s home to a number of creatures big and small. We could never hope to go over all of them. There are just too many! Instead we’ll focus on some of the cutest and most adorable animals you might come across on your trip to Peru.

Slightly larger than the average house cat (but just as adorable), the Andean mountain cat is exactly that – a species of cat that lives in the Andes mountains. All Andean mountain cats have the same ash-gray colored fur with brown-yellow splotches, two lines down their back, white cheeks, and dark rings on their tails. See the picture below.

Like other cats, Andean mountain cats are reclusive. They’re a far cry from the domestic cats wandering around your neighborhood. This makes them hard to study, but not impossible. What we do know is that they suffer from habitat destruction and competition from other predators. There are only about 2,500 of these little fellas left in the world, earning them a spot on the endangered species list. 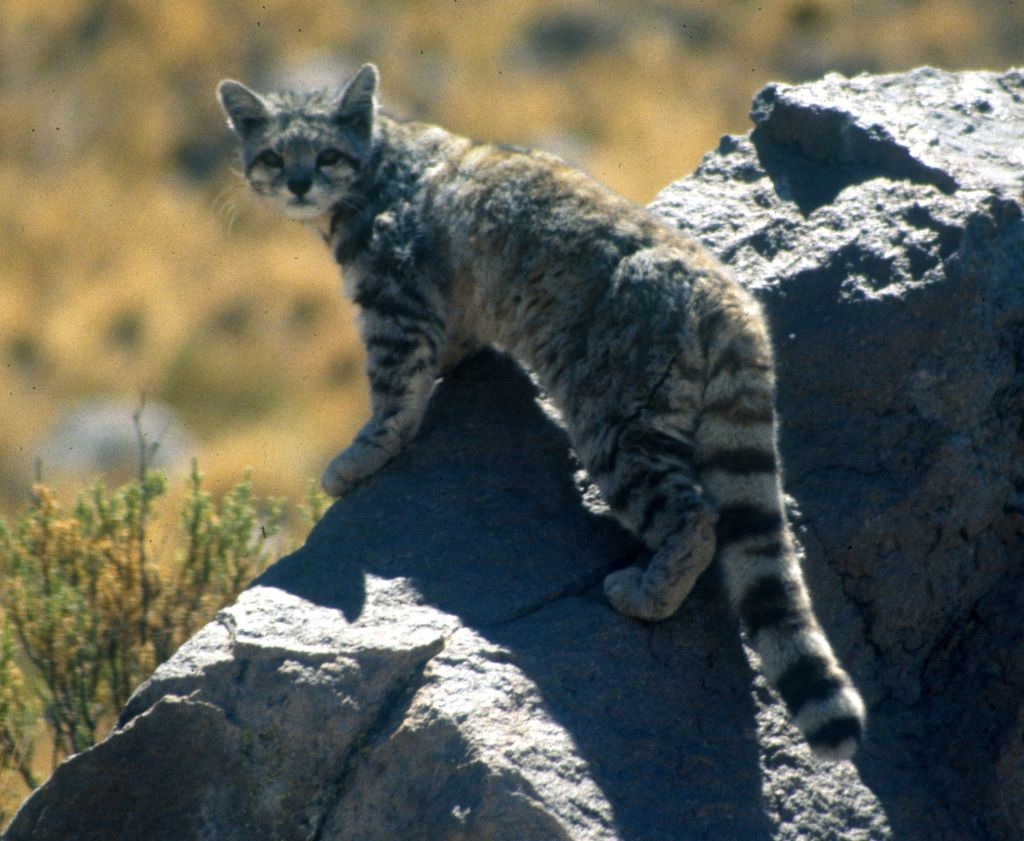 Possibly the cuddliest member of the rodent family, chinchillas are native to a region of the Andes that includes Bolivia, Argentina, and Peru. They take their name from the Chincha tribe that once lived in the area (“chinchilla” translates literally to “little Chincha”). They prefer to live at high elevations – up to 14,000 feet – where they group together in herds. Since before the Incas arrived in the area, chinchilla fur has been a prized commodity for its thickness and soft texture. While these days most chinchilla fur comes from farm-raised animals, hunting is still a real threat to the species’ survival. Over a period of 15 years, 90% of the global population of chinchillas disappeared.

Also known as the Andean short-faced bear, the spectacled bear is the last surviving short-faced bear species on the planet. Smaller and less aggressive than the typical bear, spectacled bears are almost completely herbivorous, feeding mostly on fruits, nuts, and other plant life. While mothers will attack if they believe their cubs are in danger, don’t let the big claws fool you. Spectacled bears are surprisingly docile and calm, preferring to run away or climb a tree rather than get in a fight.

These squishy-looking sea mammals are found along the Pacific coast of South America, including the southern beaches of Peru. Adult males of the species have a dark gray coat accented with tan or light gray splotches. Females and juvenile males range in color from rust brown to gray on their undersides and gray or tan on their muzzles. Males also grow manes along their head and shoulders and tend to be larger than females. An adult male can weigh over 400 pounds.

You’ve heard of llamas and alpacas before, but those aren’t the only furry camelids that call Peru home. Meet the vicuña, the wild ancestor of both the llama and the alpaca, and the national animal of Peru. Even before the founding of the modern state of Peru, vicuñas were an important animal in the region’s culture. Incan royalty would wear garments made from vicuña fur which had to be painstakingly collected by shearing the wild animals. To make matters worse, a vicuña only produces enough fur to be sheared every 3 years. Vicuña were once seriously in danger of becoming extinct due to demand of their fur, but their numbers have since rebounded.

More Than The Classics: 5 Best Things to Do in Peru off the Beaten Path
170208 Views

One thought on “5 Adorable Animals You Can See in Peru”