This article was posted on Saturday, February 24th, 2018 at 9:30 am and is filed under Festivals, Holidays. 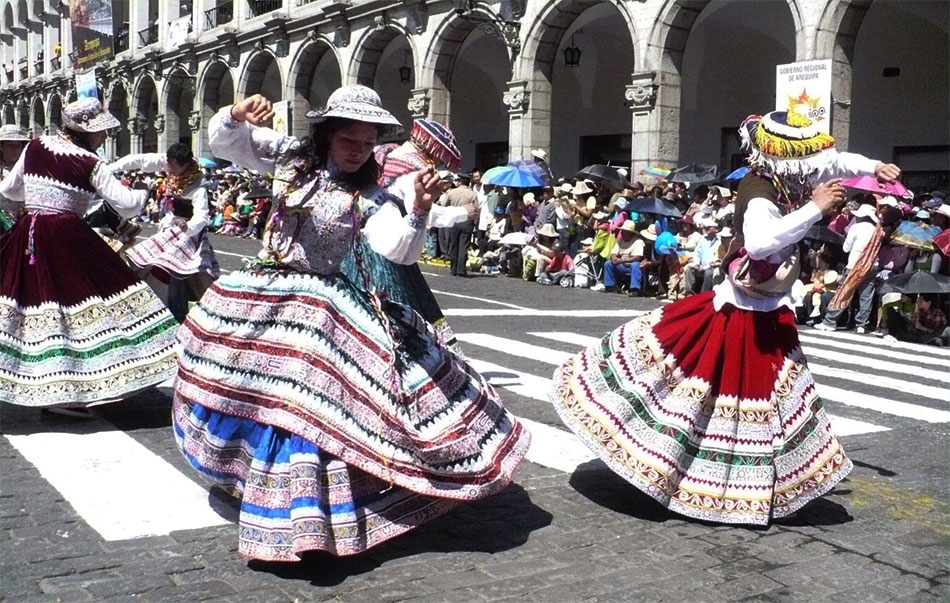 The first Arequipa carnival was held in 1541 and was practiced by Indians from nearby communities. They contributed to the ”huifalas” (wifalas), a typical dance that is still preserved.

During the carnival, “comparsas” from neighboring towns such as Yanahuara, Cayma and Miraflores arrive in the city. All arrive with their guitars, mandolins, charangos, quenas and drums with their contagious rhythms to hundreds of people waiting for them in the streets.

In the streets, people often play with water and chalk, filling the atmosphere with colors. One of the customs is the use of “matacholas”, stockings filled with colored powders, with which the girls of the town were powdered.

It is characterized by the fact that it unites all the people, without distinction of social class, highlighting its rich choreographic game, which is represented through beautiful and cheerful colored ribbons. The dance is joyful youth and marriage, executed and in which all the rules are broken and mainly by young social controls to give pass to singles. His goal of dancing is popular overflow, celebrate an open party, with games of love, irony and in which all social rules and controls are broken to give way to social overflow.

The typical dress used in this carnival is simple, a beautiful peasant costume, consisting of a three-quarter sleeve blouse adorned with lace on the neck, chest and cuffs and a skirt whose length extends to cover half of the calf.

The “Carnival of Arequipa” is a typical dance of a roguish character, in which several groups of couples dressed in colorful outfits, called “huifalas”, participate. Some often wear curious masks to give the dance more emotion.

The highlight of the carnival is the coquetry of women, who with their charms and dances seek the conquest of men. They, on the other hand, perform sarcastic acts, making the dance a moment full of joy and fun.

This great celebration is celebrated to the rhythm of “pampeña”, a modality of local huayno, and of “wititi”, a dance native of the district of Tipay. “Wititi” used to dance as a thank you to the Pachamama.

More Than The Classics: 5 Best Things to Do in Peru off the Beaten Path
208259 Views