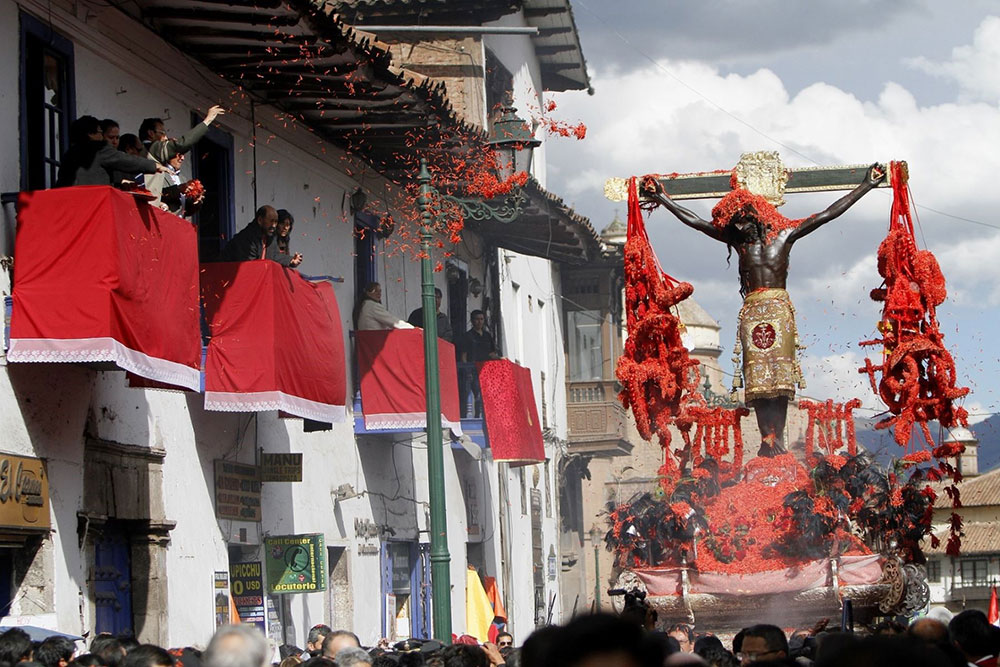 The Archaeological Capital of America and former head of the once mighty Empire of Tahuantinsuyo celebrates Holy Week by paying homage to the image of the Lord of the Earthquakes or Taitacha Temblores, in Quechua.

According to some sources, the history of this Christ of stark features and overwhelming appearance dates back to when the Emperor Charles V sent the effigy to Cusco, made especially for the Indians, copying the sharp features of these. The Spaniards sought to consolidate the conquest made by the sword and impose their worship.

His carved face – a fine dark rock – shows a serious and sad gesture, picking up at each step the cry of the faithful towards his “General of Hope”. It is believed that his body acquired that blackened tone when he first appeared on the streets, at the contact of the smoke that was expanding from the candles and candles of the people.

Since that time, the litters of this mestizo Christ come in procession every Holy Monday, followed by a crowd of parishioners who accompany him with humble fervor. In the windows of the houses, where the effigy passes, are placed refined pieces of velvety upholstery with gold stripes, fabrics and bright carpets, which families reserve especially for this occasion. Meanwhile, the Camaretos or small mortars, firecrackers and rockets shake the atmosphere with their rumble make the songs and prayers of the crowd almost inaudible.

On Good Friday, as in Ayacucho, the meeting of the litter of the Christ in the Holy Sepulcher and the Sorrowful Virgin takes place.

That day, unlike what happens in other places, is not abstinence in Cusco. The custom is to taste twelve different typical dishes that range from varied soups and stews, whether based on dried fish, wheat and olluco, to delicious desserts such as apple, corn or corn sweets.

Holy Week comes to an end on Easter Sunday. After the procession and the celebration of the mass, through the main streets you can perceive the exquisite aroma of the delicacies that delight both locals and strangers, such as the tasty chicken broth, the empanadas, the sweet of white corn, the tamales and the cakes Thus, in a pagan way, the Andean Holy Week closes in the millenary imperial city of Cusco.

More Than The Classics: 5 Best Things to Do in Peru off the Beaten Path
208227 Views