This article was posted on Saturday, March 31st, 2018 at 1:30 pm and is filed under Festivals, Holidays. 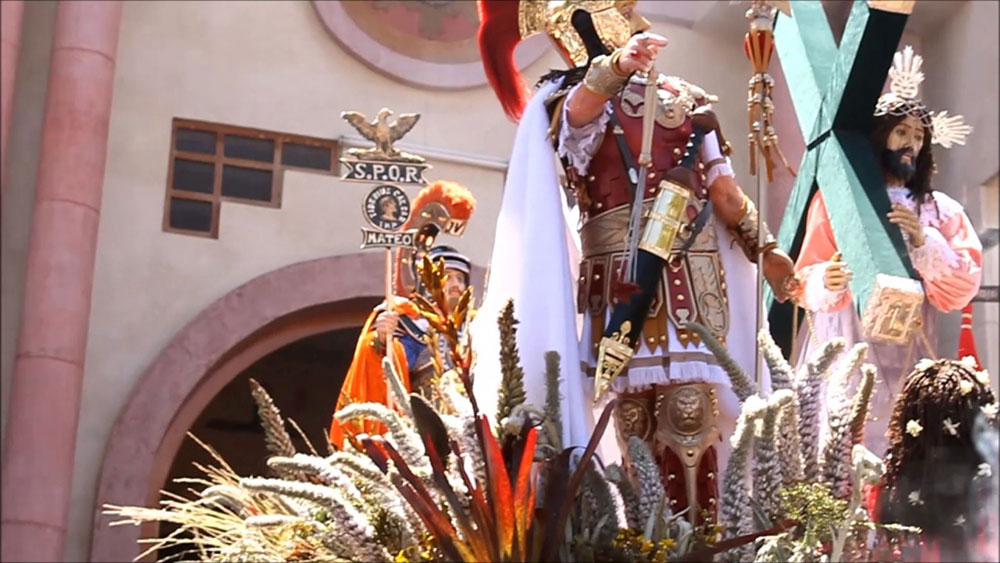 At the foot of the Huascarán – one of the highest snow-covered peaks in the world – in the city of Huaraz, Holy Week is impregnated with the tradition and customs of its people as it commemorates the death and resurrection of Jesus Christ.

In Huaraz, known as the Peruvian Switzerland, people prepare a year in advance to represent the drama of Golgotha and the subsequent resurrection of Christ with great realism.

The festival begins on Palm Sunday with the traditional parade of palms in which the effigy of Jesus on a burrito triumphantly travels through the main streets of the city, receiving applause and tribute from the population.

Each day of Holy Week is celebrated with absolute dedication. On Holy Monday, the Lord of the Orchard Prayer -peculiar figure of Christ on his knees with singular beauty, symbolizing a dialogue with God the Father- leaves the convent of San Antonio.

On Holy Tuesday, the Christ of the Columns – an image that evokes the Nazarene with Pontius Pilate – goes through the streets, escorted by Praetorian guards as in Ancient Rome.

On Holy Wednesday, the venerated image of the Poor Christ comes covered with a purple mantle and a crown of thorns and is lit by hundreds of candles and candles in the hands of the faithful.

On Holy Thursday, these celebrations reach their maximum splendor with the consecration of the Most Holy Eucharist. That day, the villagers, driven by their faith, visit the sick in hospitals, clinics and homes, as their tradition indicates.

Also, there is the nocturnal wake or “Huaraqui” -a Quechua word that means sunrise- of the Nazarene in the church of La Soledad, which lasts until the early hours of Good Friday.

On Good Friday the procession of Christ of the Cross takes place, an image that is preceded by the litter of the Sorrowful Virgin. As in other parts of the Peruvian Sierra, they are accompanied by the San Juan and María Magdalena litter, pushed by devotees who do not get upset despite the rain.

At nightfall, in the middle of the gloom, some men in white robes perform the ceremony of the deliverance and place the image of Christ in the Holy Sepulcher, a glass urn that is then carried in procession.

On Saturday of Gloria, children from all neighborhoods make dolls that represent Judas and, after touring markets and houses, burn it before the joy of the people.

The Christ is shown before the Virgin, while the flight of the birds and the burning of colorful fireworks proclaim to the four winds that the Lord has risen.

More Than The Classics: 5 Best Things to Do in Peru off the Beaten Path
148675 Views